The Most Rev. Mark Leonard Bartchak was ordained a Bishop and installed as the eighth Bishop of the Diocese of Altoona-Johnstown on April 19, 2011, at the Cathedral of the Blessed Sacrament in Altoona.

Bishop Bartchak was born January 1, 1955, in Cleveland, Ohio. He is the son of the late Leonard Bartchak and the late Rosemary (nee: Beck) Bartchak-Shay. His mother’s ethnic background is German and Irish and his father’s background is Polish. (In the Polish language, the family name is Bartczak.) Bishop Bartchak’s parents were founding members of St. Monica Parish in Garfield Heights, OH where he was baptized.

He attended Catholic elementary and secondary schools, graduating in 1973 from Bradford Central Christian High School, Bradford, Pennsylvania, in the Diocese of Erie. His college studies were at St. Mark Seminary and Gannon University, Erie, PA, where he received a Bachelor of Arts degree in Philosophy in 1977. He also studied for the priesthood at Christ the King Seminary, East Aurora, NY, receiving a Master of Arts degree in Theology in 1981. He studied canon law at The Catholic University of America in Washington, DC where he received the Licentiate degree in 1989 and the Doctorate degree in 1992.

Bishop Bartchak was ordained a deacon at Christ the King Seminary on September 22, 1980, and served as deacon at St. Joseph Parish, Warren, Pennsylvania. He was ordained a priest for the Diocese of Erie on May 15, 1981, by the late Bishop Michael J. Murphy at St. Peter Cathedral, Erie. In 2000 he received papal honors from Pope John Paul II with the title of Chaplain to His Holiness. 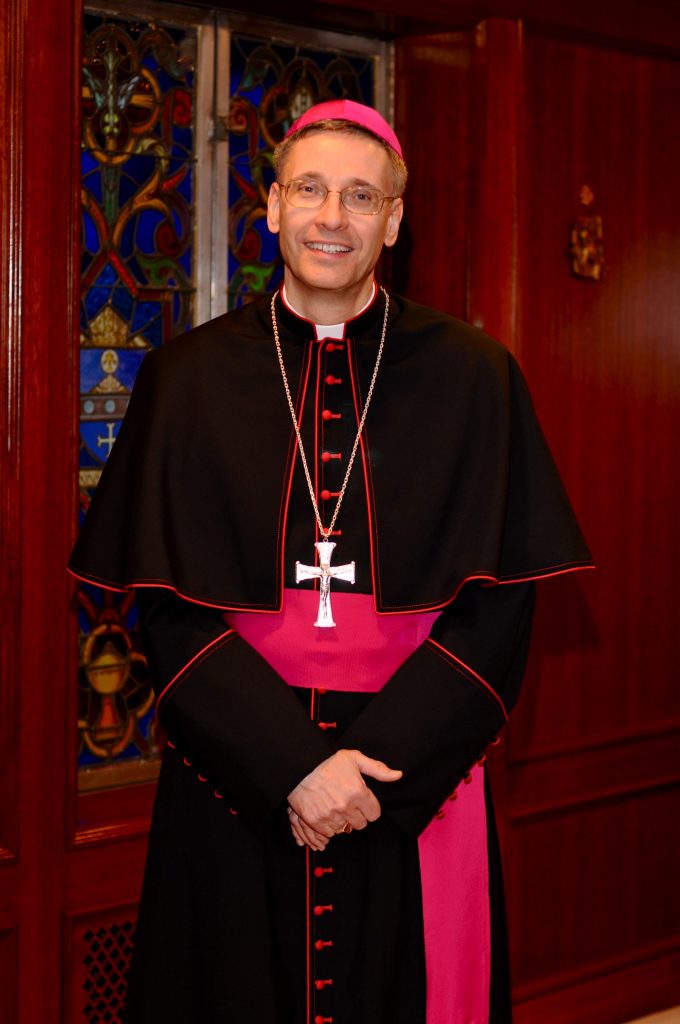 Immediately after ordination to the priesthood, Bishop Bartchak was assigned as temporary parochial vicar at St. Joseph Parish, Warren, Pennsylvania. In August 1981, he was assigned as parochial vicar at St. Francis Parish, Clearfield, Pennsylvania. He was also assistant principal and theology teacher at St. Francis High Schooland part-time chaplain at the Clearfield Hospital. He was transferred to St. Leo Magnus Parish, Ridgway, Pennsylvania, to serve as administrator of the parish for several months when the pastor became ill. He was then appointed parochial vicar at St. Leo Magnus Parish. His duties included pastoral care at the Elk County General Hospital and the Elk County Prison. In these early parish assignments he was active in local ecumenical clergy associations. He was a speaker at ecumenical and civic gatherings. He gave retreats for Catholic schools in Elk County and preached at various days of recollection and liturgical celebrations in the area. 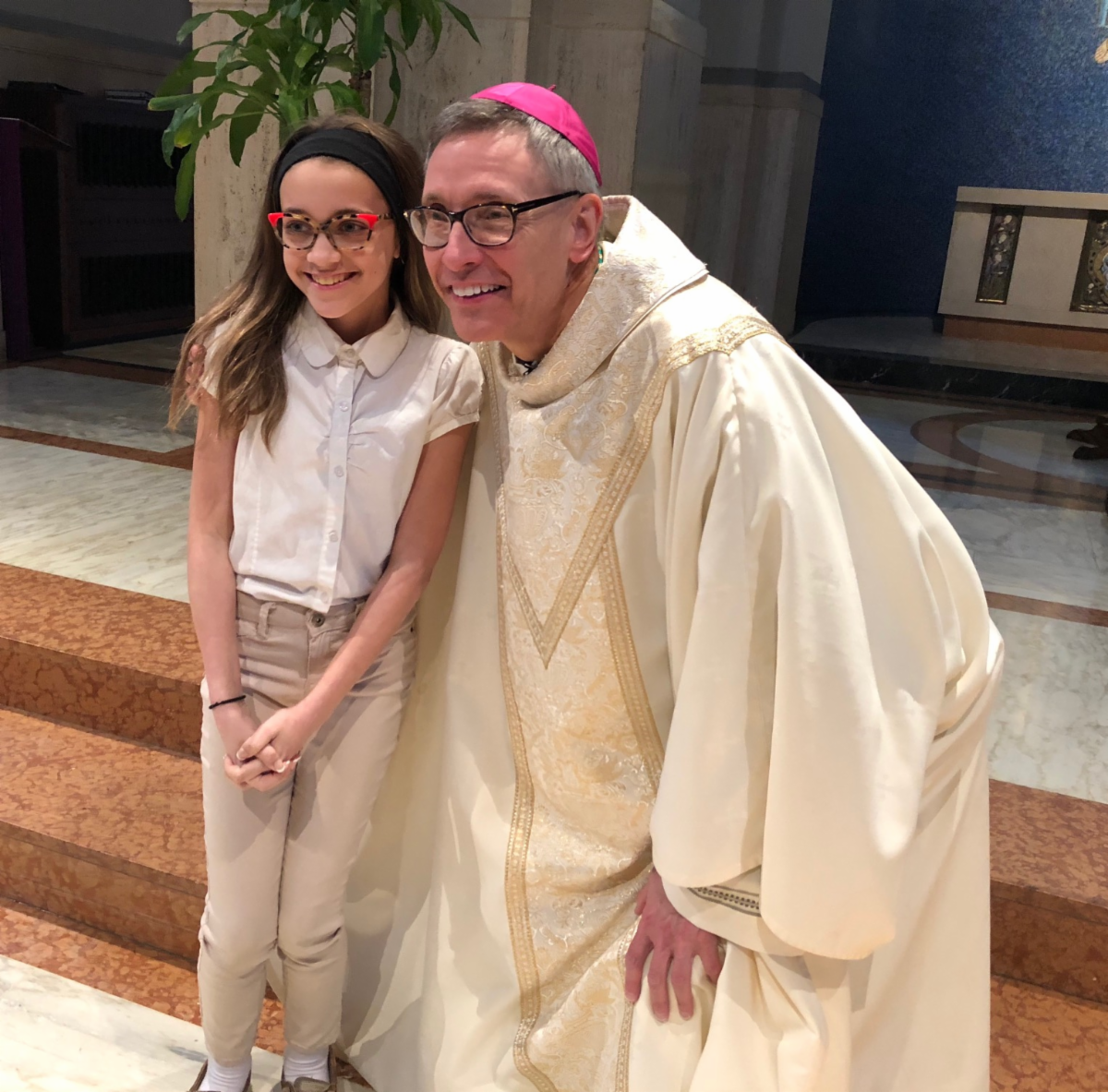 In 1982 Bishop Bartchak was appointed part-time Defender of the Bond, and in 1986 he was assigned full-time to the Tribunal of the Diocese of Erie. During his time in Washington, Bishop Bartchak assisted as a confessor at the Basilica of the National Shrine of the Immaculate Conception and at the U.S. Naval Academy in Annapolis, Maryland.

In the Diocese of Erie, Bishop Bartchak was an ex-officio member of the presbyteral council, the administrative cabinet and various diocesan committees. He served on the planning committee for the establishment of the permanent diaconate formation program of the Diocese of Erie. He was a confessor and spiritual director for Project Rachel at Catholic Charities Counseling Services of the Dioceses of Erie, and chaplain to the St. Thomas More Society in Erie. He was also a spiritual director at St. Mark Seminary, Eriesince 1991. For the past several years he has celebrated Mass each month for the men in the Erie County Prison. He has also been a confessor at the Catholic chapel at Millcreek Mall, the largest retail shopping center in northwestern Pennsylvania. He is a member of the Board of Corporators of St. Vincent Health System in Erie.

In addition to his duties in the Diocese of Erie, Bishop Bartchak has been involved in various roles in the Church on the state, national and international level. In 2004, he was appointed to the Administrative Board and the Executive Committee of the Pennsylvania Catholic Conference. In 2007 he was appointed as a consultant for the USCCB Committee on Canonical Affairs and Church Governance. Bishop Bartchak has served as canonical consultant for a number of bishops, dioceses, seminaries, and religious institutes. He has also served as a judge for the Congregation for the Doctrine of the Faith and as a visiting judge in various diocesan tribunals. He has also given presentations to clergy and laity in various places (including a study day for priests of the Diocese of Altoona-Johnstown in 2004).

Besides his doctoral dissertation, which examines canonical issues concerning spiritual formation in diocesan seminaries, he has published articles on canon law topics in various journals. He has given lectures at the faculties of canon law of The Catholic University of America, Washington, D.C., The Catholic University of Lublin, Poland, and St. Paul University, Ottawa, Canada. He has conducted seminars and workshops for canon lawyers in the United States, and for civil attorneys of the Erie County Bar Association. He has been a member of the teaching faculty of the Institute on Matrimonial Tribunal Practice held each summer at The Catholic University of America, and he has taught canon law for the permanent diaconate formation program in the Diocese of Erie.

Bishop Bartchak is a member of the Canon Law Society of America (CLSA) and the Mexican Association of Canonists. He has served on several CLSA committees. In 1999 he was elected to serve on the CLSA Board of Governors and later he was elected to serve as Vice-President (2002-2003) and President (2003-2004) of the Canon Law Society of America. During his term as President, Bishop Bartchak represented the CLSA at private meetings at the Vatican with officials of various Congregations, Councils, and Tribunals of the Apostolic See.

He has always had a great love for parish ministry. When he returned from his canon law studies, Bishop Trautman approved his request for residence in a center-city parish. Bishop Bartchak was in residence at St. Stanislaus Parish in Erie for almost twenty years where he celebrated Mass each day. He also assisted in hearing confessions at the parish and has participated regularly in other liturgical, spiritual and social events, including parish retreats and often as homilist for the annual Corpus Christi celebration. He assisted the pastor of St. Stanislaus Parish in the pastoral care for refugees (including Chaldean Catholics from Iraq) who have been sponsored for resettlement by Catholic Charities of the Diocese of Erie.

Bishop Bartchak is a member of the Knights of Columbus and has remained affiliated with Council 409 in Clearfield where he first joined in 1981. He enjoys reading, music, cycling, and doing handyman projects in the parish and with his family. In 2000 he was involved in the design planning and refurbishing of St. Stanislaus Church in Erie. 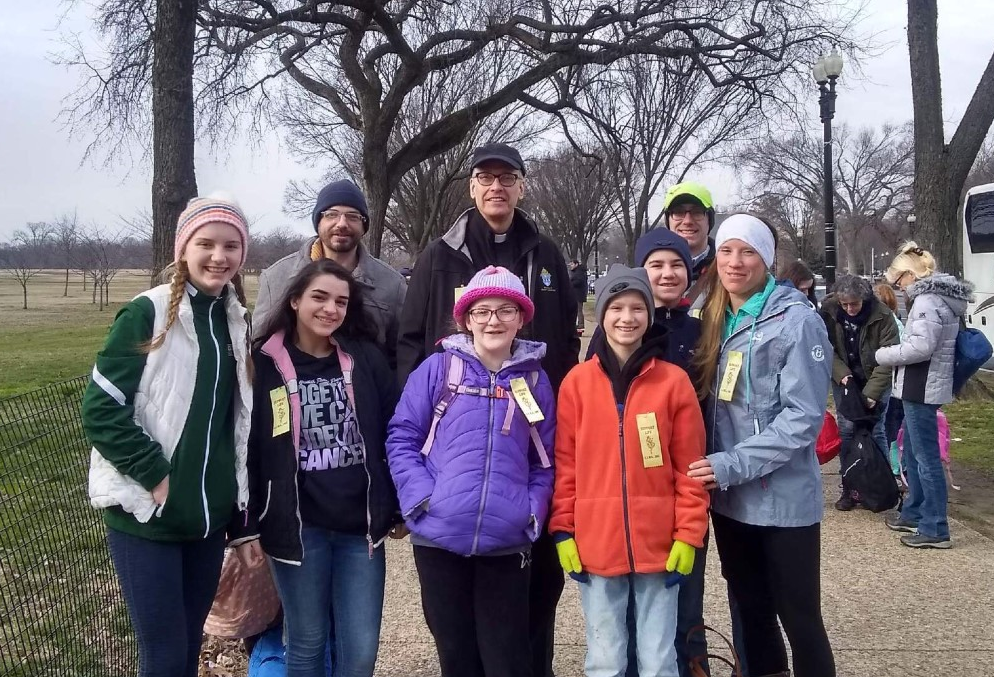 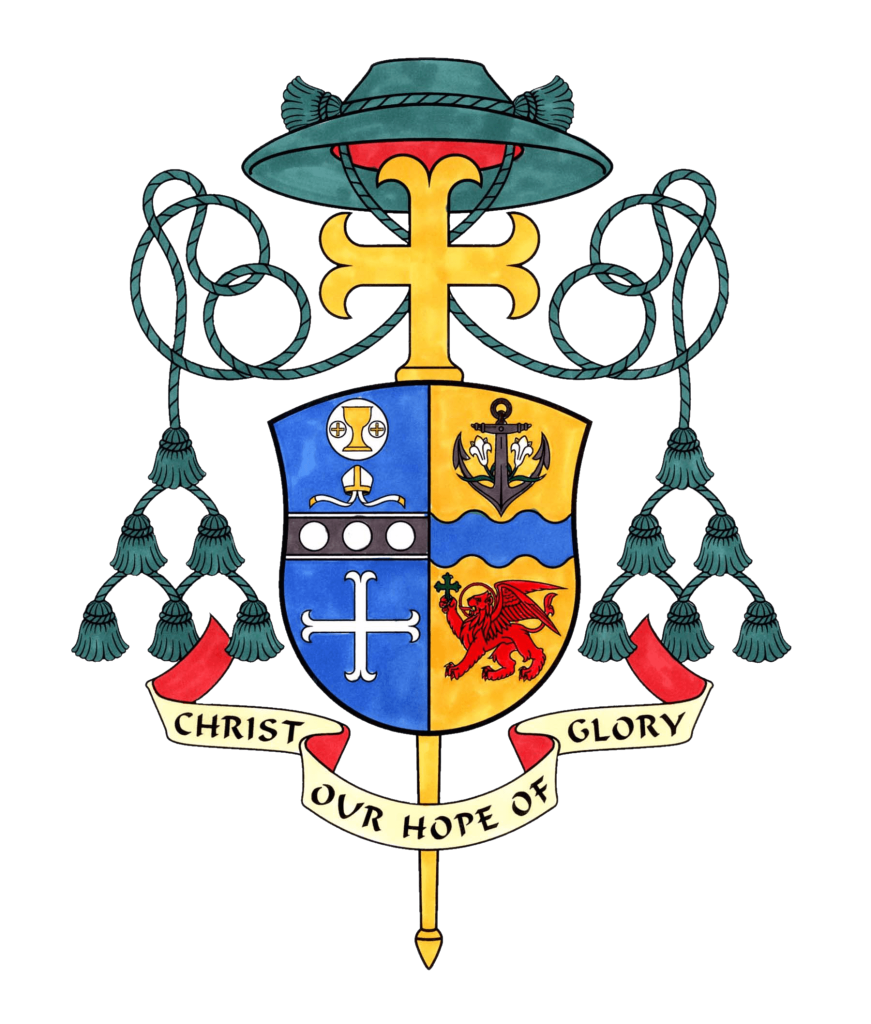 The Coat of Arms of the Most Rev. Mark L. Bartchak appear on the right hand side of the shield.

Three symbols appear on a field of gold, each with special significance to the Bishop. At the top, an anchor — the traditional Christian symbol of hope — is flanked by two Easter Lilies, symbolizing glory and resurrection. Together, the anchor and the lilies refer to the Bishop’s Episcopal Motto: Christ our Hope of Glory (Colossians 1:27).

The bottom of the shield depicts the lion, representing Saint Mark the Evangelist. Saint Mark is the Bishop Bartchak’s patron saint; the Bishop also attended Saint Mark Seminary in Erie.

Dividing the gold field is a blue wave, which is drawn from the coat of arms of the Diocese of Erie. Bishop Bartchak spent most of his life on the shores of Lake Erie. When paired with the symbol of Saint Mark, the wave is also a reminder that Christ is present in both the Word (Saint Mark’s Gospel) and the Sacraments (water).

The arms of the Diocese of Altoona-Johnstown appear on the left side of the shield. The top half symbolizes the two cathedral churches; the hosts and chalice evoking the Cathedral of the Blessed Sacrament in Altoona and the mitre representing Saint John Gualbert, patron of the Johnstown Cathedral. At the bottom appears a cross taken from the coat of arms of the Servant of God Demetrius Gallitzin. The shield is divided by a black band with three silver discs, which comes from the coat of arms of William Penn, founder of the Commonwealth of Pennsylvania.

Mounted against a golden cross, the shield is surmounted by a green, wide-brimmed hat with six tassels, symbolic of a bishop. Bishop Bartchak’s motto appears on a scroll beneath the shield.